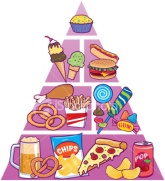 Let’s face it: we have been divided and conquered by the food and beverage industry. It’s not pretty. In fact, they have been running circles around us, more or less unopposed on their way to almost gaining 100% control of what we eat and obviously making mega profits along the way. Most people probably never realized there was a match on. Sometime in the future, I am sure we will ask ourselves how we could let them get away with so much, just like we today are asking ourselves how we failed to control Big Tobacco.

Here are some of the things they have been getting away with:

– adding sugar, salt and fat to pretty much everything to make it more palatable and cover up any bad tastes

– specifically targeting children in their advertising

– increasingly producing “food” in factories without any natural ingredients or nutrients

– saying they want to be part of the solution, for example by reducing calories, but then doing the complete opposite

All of these changes have been very gradual so that no one would notice. Historically, we have been suckers for these slow changes. As an example of just how toxic our food environment has become, picture yourself time-travelling from the 1950:s, just before the rise of the junk/fast food industry, to today. You would be stunned at the amount of junk food on offer, and the brash and cynical marketing that accompanies it (think toys to children from the latest children’s movie, for example).

Now, thankfully, the tide appears to be turning. More and more people are waking up and not liking what they are being served or how mega food companies operate, and are starting to find more healthy and sustainable food sources or even growing their own. Crucially, consumers are also getting more and more connected and organized in fighting back, particularly in the US. This is where the fighting appears to be at its most fierce, since this is also where the food environment is worst.

We have to be mindful, however, of not falling for more of their classic divide and conquer tactics. One such example is when we as researchers try to link a particular junk food or beverage to a particular health outcome, such as obesity or depression. By just focusing on one adverse health outcome, and endlessly debating this, we are shooting ourselves in the foot and not getting anywhere. What we have to do is to analyze the total cost of junk food, including all known health problems and the negative effects on the environment (which are massive).

I doubt that we can count on politicians to solve this for us, this needs to come from the bottom up, i.e. consumer power. And once enough people get fired up and organized, then we will start to see real change happening, i.e. real food, packed with nutrition and grown in a truly sustainable way, available to everyone.

Let me be clear here from the outset: I don’t particularly like most politicians, and I certainly don’t trust them, especially those higher up in office. They usually say one thing and then do something completely opposite, and they generally don’t act as their voters would like them to act.

Quite frankly, their lack of voter loyalty is nothing short of mind boggling, just look at the US congress. Marion Nestle’s recent post on “revolving door” politicians outlines this very nicely:

Too many politicians are only too happy to go straight to well paid industry jobs, usually as lobbyists or consultants for big tobacco, big pharma, big oil, or any other “big” you can think of, once they end their time as elected officials or civil servants. The many mega junk food corporations have certainly been very well served by this group of politicians/salesmen/lobbyists, at the expense of the wishes of ordinary people.

Given the wealth of scientific evidence conclusively showing that junk food is very detrimental to our health, it’s a scandal that it’s not countered more than it is, including rules for their very aggressive marketing. Most of that marketing is aimed at children to boot. This lack of action certainly serves to perpetuate the stays quo and indeed ever increasing waistlines, see this recent report in JAMA (this report is also a wake up call for all those who think that the obesity epidemic has plateaued):

Obesity rates (and rates of many forms of cancer, diabetes, depression, etc) could certainly be slowed down and possibly reduced by our elected officials through banning and taxing junk food much more severely. So why don’t they? If you ask me, there are too many revolving doors, too many corporate loyalties, and too many gutless politicians who dare not rock the boat.

The price for all this corruption at the hands of all those who should be serving the public interests first are ever increasing rates of obesity and other non-communicable diseases. This will certainly please big pharma but very few others. How much longer should we tolerate this?

Please share this information so that more and more can become aware of how we can stop obesity, thank you.

Short follow-up from yesterdays post on how survival issues are increasingly getting in the way of finding solutions to the epidemic. This summer I was sad to read that people in Detroit are having serious water shortages, see http://www.theguardian.com/world/2014/jul/21/detroit-water-shutoff-life-or-death. That’s right, Detroit is right by the Great Lakes, and yet they have water shortages. When there are water shortages in the Sahara it’s not that weird, but Detroit? I know that the city has fallen on hard times, but water is such a basic need. Whatever happened to the American dream? Maybe Blofeld drank it all…